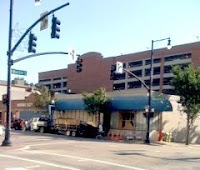 Took a stroll this morning to get some coffee and noticed that there was some demolition / cleaning up going on over at 237 S Wilmington St. I wandered over and asked one of the workers what was going on. They already had a truckload of debris and were sweeping up the sidewalk. The inside was just a giant empty space, but he said that they were prepping it for a restaurant/night club. Two levels.

The tax records show Carpenter Jensen Ventures as the owners, but I expect that it has been leased to someone. I've always thought that the building would make a great restaurant, what with all the windows in the front. Hopefully they'll clean up the facade a bit as well.
Posted by Hilary Stokes at 10:20 AM No comments:

Music makes you feel young. That’s all there is to it. A song might remind you of a friend, an event, a special time in your life 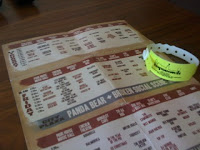 Having said that, I’m not a music geek or one of those people that knows about bands long before they become mainstream. But I am loving this Hopscotch event. I had only heard of one of the bands on the schedule. Well, maybe two, but I didn’t realize I knew their songs til I heard them play.

Anyway, the whole point here is that I think Hopscotch has done wonderful things for Downtown Raleigh. I can be pretty cynical sometimes and I have plenty of friends that are the same way and we sit around and complain about how Durham stole this and Raleigh can’t get it together with that. Downtown, for a long time, seemed to be (and still does sometimes) morphing into a Miami scene –basically a place to get dressed up and go out late. Not that something like that is terrible, but there just doesn’t seem to be anything else for the rest of us other than more bars. A thriving downtown needs diversity and lots of different things to do. Hopscotch has definitely kicked Raleigh's ass into gear.

What I love about Hopscotch is that, despite the Hipster-haters, it isn’t all hipsters! I’ve seen older folks, high school folks, nerdy types, fashionistas, and just plain ol’ regular people in jeans and a t-shirt looking for good music. It's an event for everyone with all types of music in all types of venues.

I used to have a friend that would keep me posted on all the latest cool music, but he moved away, had a child, and found better things to do. So I languished in the new music part of my life – my own fault. So I took the chance to visit the venues at Hopscotch that had music that I might not have ever heard. I took in some honky tonk at Lincoln Theater the first night, listened to Pictureplane at Berkeley (very new to me!), back to Lincoln for American Aquarium (his voice got on my nerves), so over to Pour House for Sleepy Sun, and back to Lincoln for Lucero.

Night two brought The Rosebuds and Broken Social Scene (LOVED it - will be downloading later). But I didn’t get the whole Panda Bear thing. He had three songs to convince me to stay, but it was all just droning sound.. not for me. And when there are so many other bands to choose from, I’m not sticking around! So over to Pour House for Ryan Gustafson who killed it, then to Tir Na Nog for my guys Kingsbury Manx, then bounced around a bit from Kings (Sightings?? Is that music??), to Deep South for Erin McKeown (boy, she's tiny, but powerful!) and Caitlin Cary and Matthew Douglas. 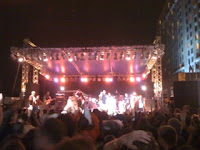 m the Helping Hand Mission band that rolled through the crowd, beating their drums to warm up the audience. The funny part is that I probably couldn’t name one Public Enemy song. Sure, once they started up I recognized a few. They put on a great show and I stood there in the rain and soaked up every bit of it. I’ve never felt so much bass in all my life. The hair on my arms was bouncing. Oh, and let's not forget Flav's new line of drinks. Chateau Le Flav. I'm not kidding.

The great thing about living downtown is that you can stand in the rain, walk two blocks, change or dry your clothes, and get back out there in a matter of 15 minutes. I love it!

TigerCity, Bear in Heaven and Megafaun rounded out the last night for me. My feet are killing me, but it was all worth it. I learned all kinds of new music. I might not be able to hear for the next three days, but there’s no better medicine to make you feel young and alive than live music. Plus, it proved that Downtown Raleigh can support these kinds of events.

P.S. On a more shallow note, the mustache seems to be making a comeback. A few of the bands on day 3 seemed to have a 70's/80's blend between disco and lots of keyboards. And the mustache and floppy hair made me think they were channeling Barry Gibb. Just sayin..

Three years later and I still love my guys at Sosta Cafe. Check out the guest post I wrote for the DLA here.
Posted by Hilary Stokes at 5:18 PM No comments: