Are we there yet? Is real estate going to improve?

Each year the Raleigh Regional Association of Realtors provides a seminar on real estate trends. Last year Dr. Michael Walden, economist from NCSU, was part of a panel and he talked about everything from household savings trends to GDP. Last year the takeaway was that until most people can save money for a down payment, or at least get out of debt, we wouldn't see a huge increase in real estate home sales.

That sentiment was echoed in a panel of commercial brokers earlier this year. The consensus was that, over time, there will be a slight improvement, but we shouldn't plan to see a huge improvement in the real estate world any time soon. Hits, not homeruns. 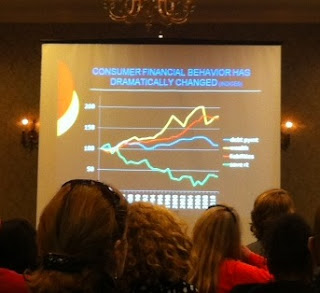 So today I expected to hear a lot of the same, with hopefully data showing that things are headed in a positive direction. Dr. Walden's presentation was very similar to last year with the exception that household wealth seems to be higher than liabilities, which was not the case last year. So that's good. But economic growth is still painfully slow. It's in a positive direction, but not moving up very quickly.

What was most interesting about today's seminar was Mitchell Silver's presentation titled "Emerging Issues in the 21st Century." As Raleigh's Planning Director, he has a different perspective than Realtors. He's looking far into the future while most Realtors are looking at the present, and maybe a year or so ahead. But certainly not out into 2030 and 2050.

Director Silver reviewed a lot of information very quickly, so it was hard to document exactly what he was saying and still pay attention and absorb it all. What I loved about his presentation is that, while focused mostly on demographics, it answered the WHY question for so many issues. Why is transit so important? Why are cities so focused on downtown cores? Why should we care about the development code?

The facts that I found most interesting were (most of these were national numbers):
Like I said, he covered a lot of territory, so take these bullets with a grain of salt.  He is the expert in this area and he covered a LOT more than those bullets above. He said he would publish his slides once he was finished with the speaking circuit, so stay tuned.  Overall, I think I was most pleased with his talk because I think it is what the audience needed to hear. As real estate agents, we are essentially ambassadors for the city and we now have the data to inform our clients when or if they start to express concern about transit or all the attention being spent on downtown. Downtown cores are critical to the tax base and can generate more revenue per acre than the suburbs. Transit is a necessity, not a luxury, for the aging population. His data put everything into perspective and was very practical.  In this day and age of the 30 second sound byte and divisive politics, it was very refreshing. I'm glad he's on our team.
Posted by Hilary Stokes at 3:45 PM 2 comments:

On October 2nd the Triangle chapter of the American Institute of Architecture hosted its 2nd annual tour, which was fabulous! I thought I would share a short synopsis of what I saw. 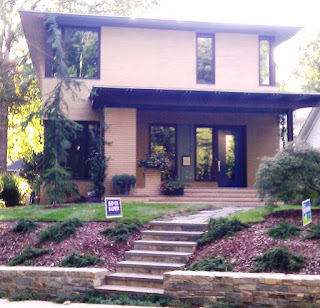 Rd, Raleigh
My kids and I walk by this house almost every day on our way to school. I watched the construction from foundation to landscaping so I was super excited to get a chance to see the inside of the house. I was blown away! I loved the blend of colors and materials in the kitchen/dining room. As with most contemporary homes, tons of windows let in natural light, but this house takes it a step further by varying window shapes and styles, drawing the eye to different levels of the home. The master bedroom is oriented to give the feeling of a tree house with views of the wooded park across the street. The home blends well into the urban neighborhood feel of Cameron Park. Although most homes in Cameron Park are traditional, E. Forest Rd is creating its own contemporary enclave expanding the theme of urban living within an historic framework. 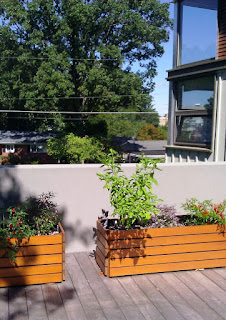 Graham Street in Cameron Village, like E. Forest in Cameron Park, personifies the modernist trend in these historically traditional neighborhoods. There are several contemporary homes in the neighborhood as well as a number of renovated mid-century homes. The theme of this home is Green Building and Sustainable Design. The roof collects rainwater, the solar thermal panels collect sun to heat the home and the home’s water supply. The orientation of the home provides shade from the trees in summer and sun in the winter to provide natural heating and cooling elements. I loved how the matching ‘butterfly wing’ patios on the second story of the home overlook the neighborhood.

Davis Residence 3105 Janice Road, Raleigh
This home has a simple open floor plan encased in two story windows that span the entire south and east facing walls, giving the home owner a feeling of living among the trees. The home owner wanted to evoke the memory of summer camp cabins, the essence of which is evident in the exterior design of the home’s overhanging roof line and the quiet way the home sits on small stilts. Besides the obvious ‘wow’ factor of the home, I liked the smart use of a small space: lots hidden storage, the loft area for an office (keeping the clutter out of the main living area), ample guest room with bath tucked above the master, and small kitchen that doesn’t seem cramped due to the openness of the living/dining area beyond. The house feels like the perfect country retreat.

Posted by Christine Lewis at 11:18 AM No comments: